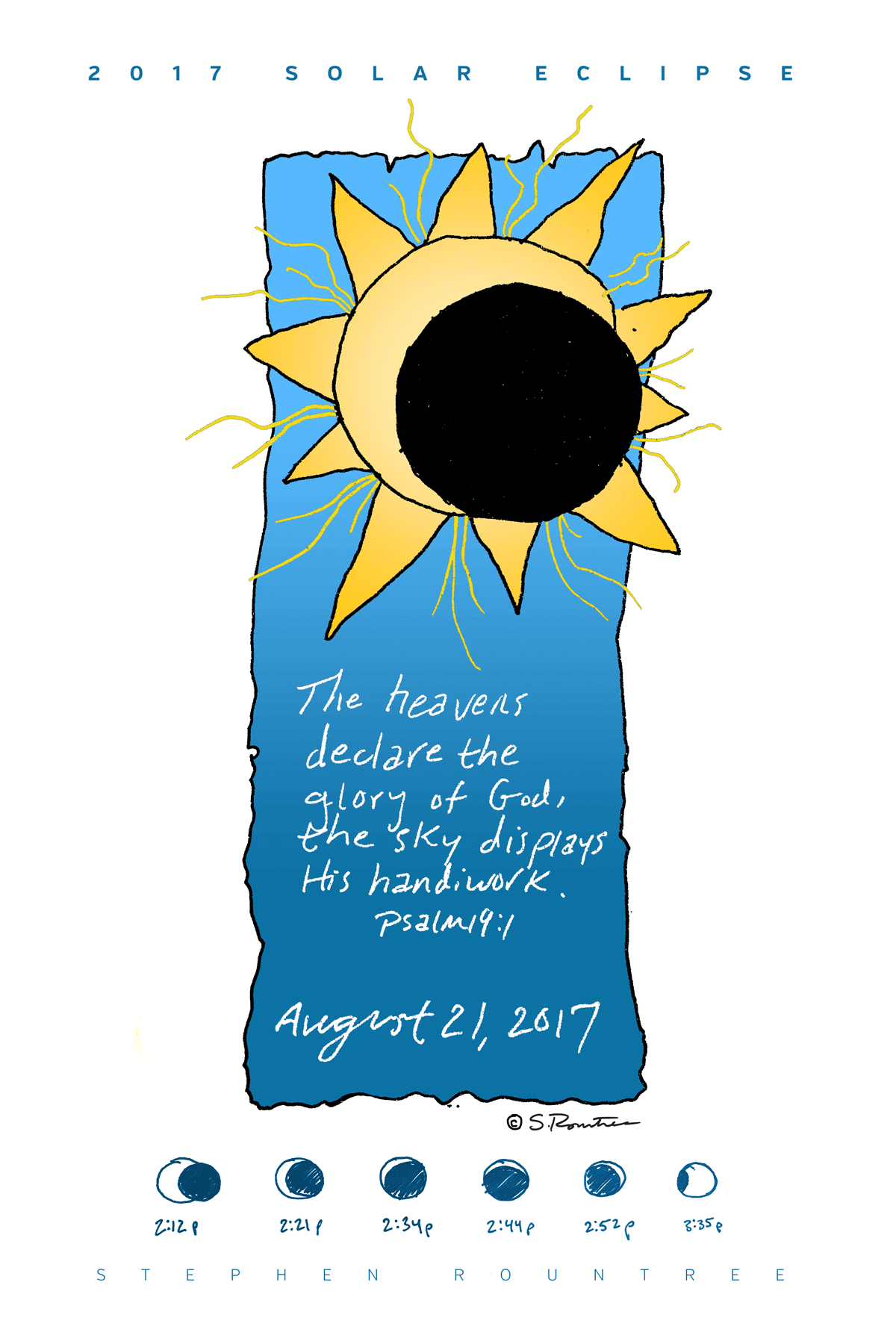 Aug 21, 2017 brought a total solar eclipse to viewers across the United States. And sky watchers in other parts of North and South America could see at least a percentage of the sun blocked by the moon. Did you see it? If you were like a lot of folks, you got your glasses and hoped for clear skies.

Some folks made a road trip for the chance to watch the eclipse in the path of totality, where the moon completely blocked the sun. We watched with my wife’s parents at their Varina, Virginia farm where the sun was only about 80 percent eclipsed with the rest peeking from behind the moon. Still, it was spectacular.

The television news teams were stationed all over the place covering the event, especially along the path of totality. As we watched the coverage, a reporter interviewed an eclipse observer. The subject said he thought it was amazing that mankind had become so advanced over the centuries that we could know with certainty where and when the eclipse would occur. To him, it showed the intelligence and power of man.

I agree that one of the most striking things was the fact that we did know the day, hour, and precise minute the eclipse would begin, how long it would last, and when it would end. And even more amazing to a math-challenged, right-brain thinker like me was the fact that we knew precisely where on the spinning globe we call home you’d need to be to see the sun completely blocked by the moon and we knew the percentage of totality other areas would experience.

But I think the man on television missed the larger lesson. Yes, it is impressive that in the course of human history, we’ve advanced our knowledge and developed the tools with which to make such accurate predictions. Even more impressive, however, is that we live in a universe that is so ordered that we are able to make those predictions at all. In spite of the chaos we often see around us today (and often of our own making), the design of our world is a beautiful thing.

As a designer, whenever I recognize design, I know someone has been there ahead of me and set things in specific places for some purpose. Whether I’m reading a newspaper, using my smartphone, or simply walking down the street, wherever I go I’m surrounded by design. At its heart, design is an attempt to provide structure and bring order to some part of our world. Whether it’s organizing the news we read, providing a network through which we can rapidly communicate, or creating efficient and safe corridors for transportation, good design adds value to our world and is a hallmark of intelligence and creativity.

Once design is discerned, patterns often become apparent. When you approach a traffic light that’s yellow, you know what the next light will be. It never goes from yellow to green, despite how some folks drive. It always changes from yellow to red because that’s the way it’s designed.

The natural world is no different. We see patterns and other evidence of design all round us. When the leaves explode in their autumn reds, yellows, and other hues, we know what’s next. Like the traffic light, they’re not going back to green. The eclipse is just one, albeit an impressive one, of the countless signatures of The Maker upon His creation. When an artist signs his work, he makes a claim on that work, saying, “I created this.” So the God of heaven and earth says with every pattern we can see, “Look! I created all this—everything you can see, and everything you cannot!”

The apostle Paul’s letter to the Colossians (verses1:16-17) says, “…for through Him [Jesus] God created everything in the heavenly realms and on earth. He made the things we can see and the things we can’t see—such as thrones, kingdoms, rulers, and authorities in the unseen world. Everything was created through Him and for Him. He existed before anything else, and He holds all creation together.”

But even if we’ve never read a single word of the Bible, we know in our hearts that God is real and that He has made the world we live in. We know because we live in the middle of the evidence of His existence.

The New Testament book of Romans says this very thing in its first chapter, verse 20: “For ever since the world was created, people have seen the earth and sky. Through everything God made, they can clearly see His invisible qualities—His eternal power and divine nature. So they have no excuse for not knowing God.

Nine hundred years before Paul wrote those words, King David expressed a similar idea in Psalm 19: “The heavens proclaim the glory of God. The skies display His craftsmanship. Day after day they continue to speak; night after night they make Him known. They speak without a sound or word; their voice is never heard. Yet their message has gone throughout the earth, and their words to all the world. God has made a home in the heavens for the sun. It bursts forth like a radiant bridegroom after his wedding. It rejoices like a great athlete eager to run the race. The sun rises at one end of the heavens and follows its course to the other end. Nothing can hide from its heat.”

Poetic language describing the works of a massively creative God. An eclipse is one of His grand signatures across His creation. And for a few hours on August 21, 2017, that signature stretched across our country for all to see.

This week in the shop, I’ve got a new print (shown above) created from sketches I made during the 2017 eclipse. The image reminds me to stay open to seeing the fingerprints and signature of God all around me, and to remember Him not only as my creator, but as my sustainer and provider, too. You can visit the shop here and order your own copy today.