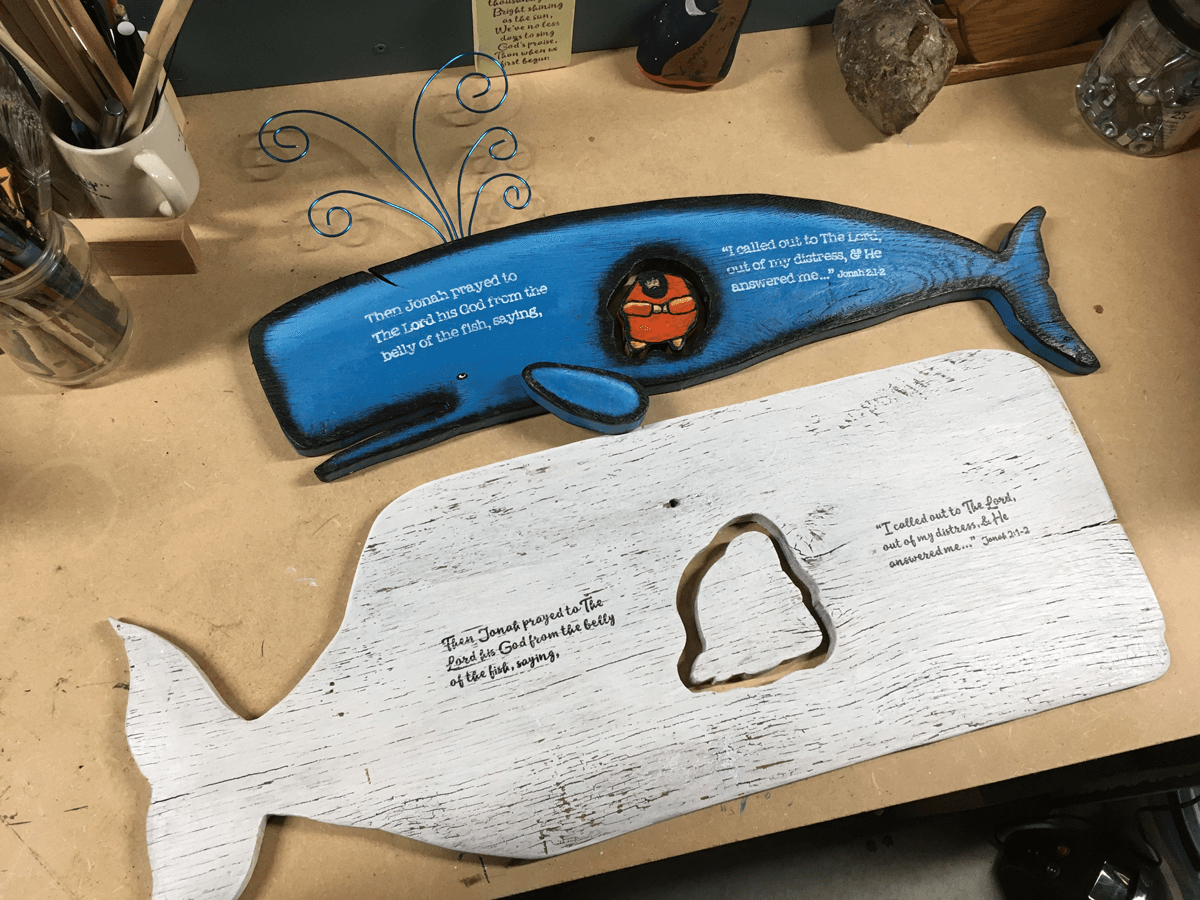 In the studio: I'm working on a new version of my earlier Jonah sculpture. This one experiments with the simple white pickled stained barn wood with black hand-stamped text from Jonah chapter 2. Jonah will be illustrated in the black in the center cutout. Depending on your translation of the Bible, you'll see references to both a "great fish" and a "whale." No one really knows. The ancient languages just refer to a "large sea creature." It might have been any sort of ocean-dwelling animal large enough to swallow a man. I enjoy drawing whales, but the important point is that all of creation is at God's disposal to carry out His plans.

A first-series Jonah sculpture is currently available in the shop.

I haven’t seen any statistics, but I believe there’s a lot of praying going on in our country—and the world—at the moment. And that’s a good thing. The microscopic coronavirus might do for us what the fish (or whale) did for Jonah in the Old Testament.

Jonah, of course, is famous for being swallowed by a large, unspecified sea creature and, after three days of intense social distancing, was heaved up and spewed out onto the shore, a changed, and no doubt rank-smelling man. For some folks, that’s about all of the story they remember.

It’s worth noting, though, that the reason Jonah ended up in the creature’s belly was that he was running away from God. The first few lines of the account explain it: “Now the word of the Lord came to Jonah the son of Amittai, saying, “Arise, go to Nineveh, that great city, and call out against it, for their evil has come up before me.” But Jonah rose to flee to Tarshish from the presence of the Lord. He went down to Joppa and found a ship going to Tarshish. So he paid the fare and went down into it, to go with them to Tarshish, away from the presence of the Lord. (Jonah 1:1-3 ESV)

It took being swallowed by a large sea creature to cause Jonah enough distress that he stopped running from God and calling his own shots. He finally acknowledged God and became obedient to his Creator.

Stuck in the creature’s belly for three days and three nights (sushi, anyone?), Jonah realized his error, humbled himself and prayed to The Lord. Jonah 2:1-2 records that God heard his cry: “I called out to The Lord, out of my distress, and He answered me; out of the belly of Sheol I cried, and you heard my voice.”

From massive to microscopic

Today, our society may be in a similar situation. Instead of facing a great sea creature, we’re finding our economy, societal structures, schedules, employment and in some cases, our lives, swallowed by a microscopic virus.

It would be easy to write a post that simply called out the many ways our modern culture has turned its collective back on God and run the other way. It certainly has. But better writers than I have already tackled that in numerous articles and commentaries.

Instead, today, I’m wondering about myself as an individual. And maybe you’ll take a moment and ask yourself the same questions: Will I learn the lesson that Jonah did—that I’m accountable to the Creator of the universe? Will I use this time isolated from others without my usual comforts and routines to reflect on my relationship with God? Will I decide to truly seek and follow His plan instead of my own? Will I decide to whole-heartedly serve Him and do what He calls me to do instead of chasing after my own enrichment, pleasure, and comfort?

I can’t make that decision for our whole society. I can only make it for myself. But after I make it (and, really, I have to make it anew every single day), I can model it for my family and friends. And that’s how communities and countries change—one person at a time, influencing another person. Read the rest of the short account of Jonah here to see how it played out in his day.

We may be in the belly of the virus for a while. And this may be a rough ride and we may not be smelling great by the end, but we can experience the closeness and blessings of God like never before if we choose to respond like Jonah.

Drop me a line in the comment box below to share how you’re using this season of isolation and social distancing.