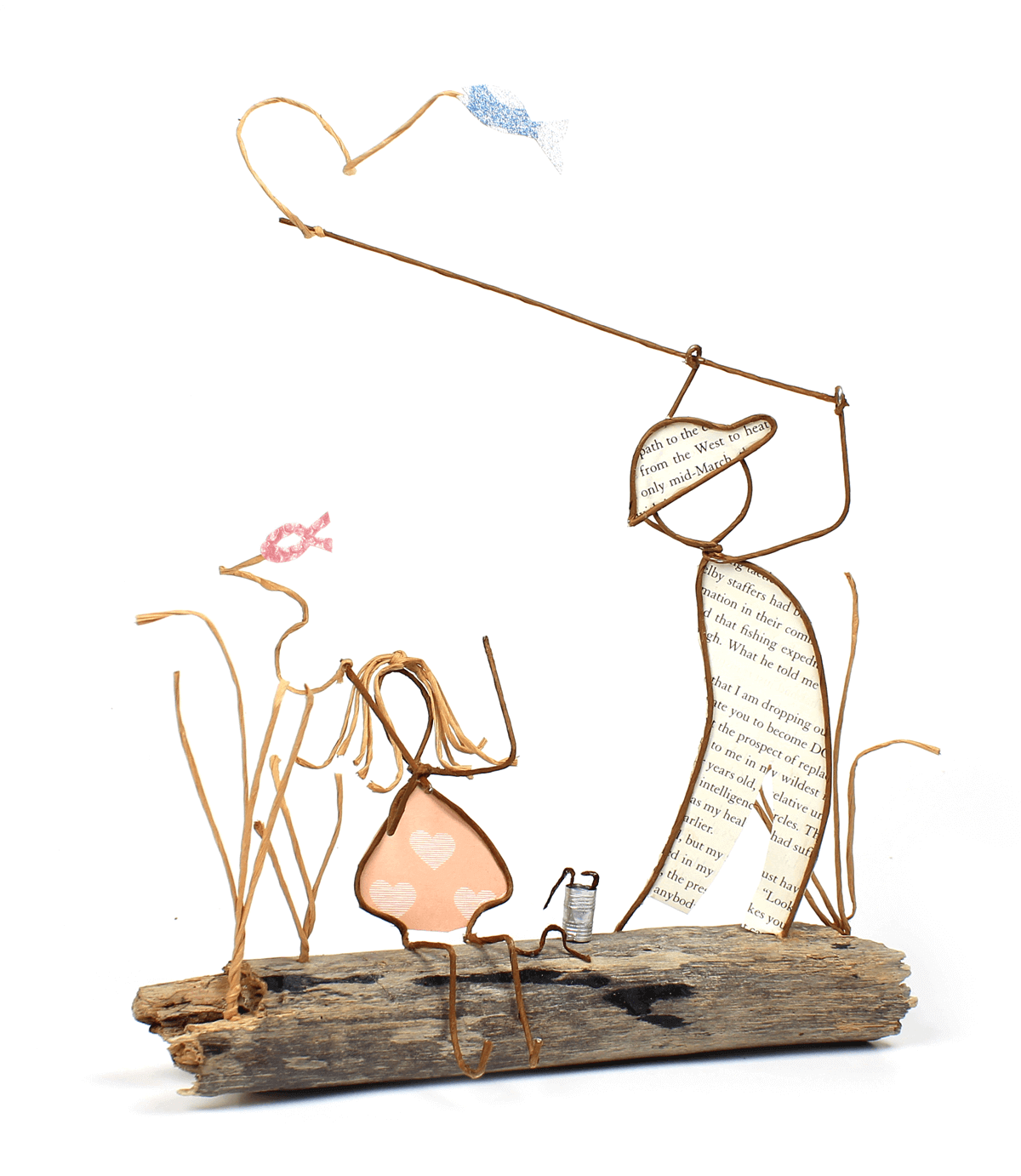 "Fishing with My Dad" is a wire and cut paper sculpture set in driftwood by Patti jones. Memories of the river bank with her father, her rod and reel, and her bucket of worms.
See this in the shop

As the summer winds down, school has started, or will soon start for students and families everywhere. There’s a rhythm to a new school year, isn’t there? The relatively relaxed pace of summer seems to reluctantly give way to the regimen of academic and athletic schedules. New books to read, new project deadlines, practices and games, and of course, the ever-quickening march toward Thanksgiving (in the U.S.) and Christmas all take the place of slow, long days of sleeping in and staying up late. All of which can cause us to rush to squeeze in that last experience of summer freedom around this time of year.

Patti’s sculpture, Fishing with my Dad, part of her Wire People series, reminds me of this. Fishing just goes with lazy summer days like peanut butter goes with jelly. I’ve fished a little and I know there are those who take the sport quite seriously, but to my mind, there’s not a more low-key, relaxed activity that lets you still claim to actually be accomplishing something, or at least trying to. That probably doesn’t apply when you’re reeling one in, as the characters in this sculpture are doing.

And this time of year, a time of transition, finds many of us anticipating something. In a way, we’re all fishing. We’re standing at the water’s edge. You know the water’s edge? Where the land ends and the water and all that’s unknown under its surface, begins. That’s where we are in this season. We’re standing at autumn’s edge, where the summer ends and the autumn begins—autumn, and all that’s unknown, and yet to come in the course of its days. And we’re fishing. We’re looking, hoping for something.

Maybe it’s that last celebration of summer. Maybe we feel that summer slipped by too fast and we want to get the family away just one more time. We want to catch one more big one for the scrapbook, or Facebook, or Instagram feed, if you prefer.

Perhaps we’re looking ahead, casting out in front of us. Students might be fishing for a better school year. Teachers may be dropping in their lines hoping to pull up an engaged, motivated class. Parents may be angling for some balance between academics, extracurricular activities, and family time. Newly minted sixteen-year-olds may be casting about for a job, or their first car. But we’re all standing here, at the edge, fishing, hoping for something. And that’s not a bad thing at all.

We’re all standing here, at the edge, fishing, hoping for something.

Jeremiah 29:11 is one of the most quoted verses in the Bible, and for good reason. It’s full of encouragement for those fishing for hope. It’s been cross-stitched on pillows and engraved on plaques and signs. And without a single survey to back up this statement, I’d speculate that it’s nearly as well known to a Christian audience as John 3:16.

But the backdrop of the verse is one of pain and suffering. It’s actually part of a letter that the prophet Jeremiah sent from Jerusalem to the Jews who had been taken captive by King Nebuchadnezzar and who were now living as exiles in Babylon. God was using their defeat and captivity at the hands of Nebuchadnezzar and the Babylonians to punish them for their rebellion and their many years of worshipping false gods. And yet, even in the midst of disciplining His own people, God gave them a promise and a reason for hope. They were told to live their lives in their new city, to grow their families, and to pray for and help their city to prosper. Then in verse 10, Jeremiah wrote these words of The Lord, “When seventy years are completed for Babylon, I will come to you and fulfill My good promise to bring you back to this place.” His next sentence was the encouraging verse 11: “‘For I know the plans I have for you,’ declares The Lord, ‘plans to prosper you and not to harm you, plans to give you hope and a future.'”

Fishing for, and finding, hope in the midst of trials and despair was (and still is) possible because it’s The Lord Himself who promises good things for our future.

No matter what we’ve experienced in the past year, we stand at the edge of autumn and all the unknown that lies before us. And we’re fishing—and hoping, and trusting, or at least trying to.

A generation or two before Jeremiah, the prophet Isaiah looked around and saw that no one was as powerful and as caring as The Lord. So he wrote these words, which will be my mantra as I stand at this autumn’s edge. Maybe they’ll inspire you, too. “But those who trust in The Lord will find new strength. They will soar high on wings like eagles. They will run and not grow weary. They will walk and not faint. (Isaiah 40:31 NLT).

Tight lines and a great catch to you!