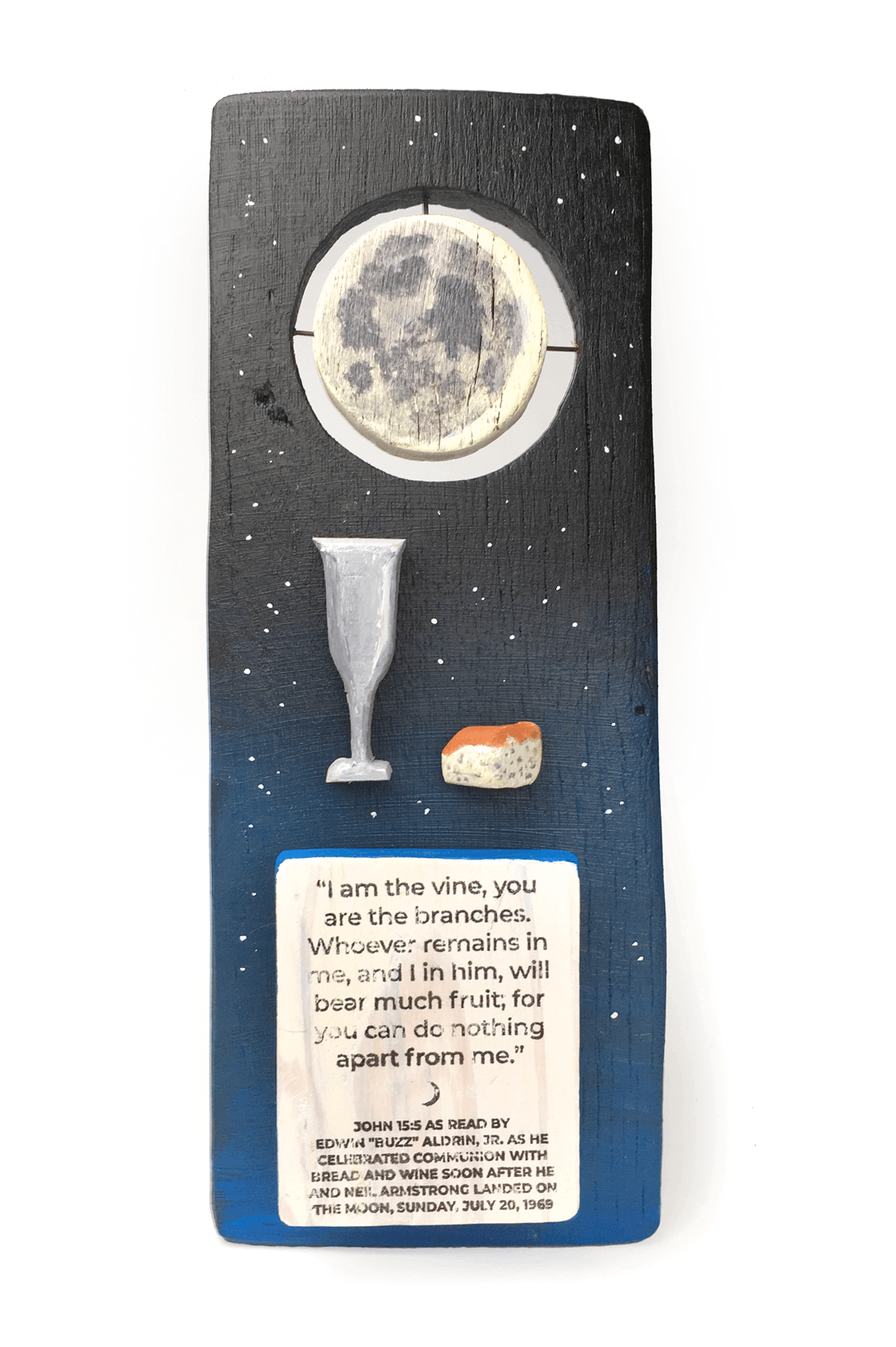 This sculpture by Stephen, in salvaged wood and acrylic paint, celebrates the observance of Communion upon the safe landing on the moon of the Apollo 11 Eagle Lunar Lander on Sunday, July 20, 1969.

Today marks its 50th anniversary. Newspapers, magazines, and the Internet are full of remembrances of the event that captivated the attention of the world as Neil Armstrong and Edwin “Buzz” Aldrin, Jr. became the first humans to set foot on a celestial body other than earth.

What was not as frequently reported at the time—and not as often remembered today—is that the first liquid poured and the first food eaten on the moon were the elements of communion, the bread and the wine that Jesus Christ commanded His followers to take in memory of Him until He returns (Luke 22:19-20).

After Armstrong and Aldrin landed the Eagle at Tranquility Base on July 20, there were a few hours of rest scheduled before they opened the lander’s hatch and made their historic descent onto the lunar surface. Aldrin, an elder at Webster Presbyterian, just outside of Houston, used a few moments of that down time to observe The Lord’s Supper.

Aldrin wrote about the experience for Guidepost magazine, explaining that he and his pastor, Dean Woodruff, “had been struggling to find the right symbol for the first lunar landing. We wanted to express our feeling that what man was doing in this mission transcended electronics and computers and rockets.”

“I wondered if it might be possible to take communion on the moon, symbolizing the thought that God was revealing Himself there too, as man reached out into the universe. For there are many of us in the NASA program who do trust that what we are doing is part of God’s eternal plan for man.”

Aldrin and his pastor planned the communion celebration together. Aldrin explained, “I could carry the bread in a plastic packet, the way regular inflight food is wrapped. And the wine also–there will be just enough gravity on the moon for liquid to pour. I’ll be able to drink normally from a cup.

The astronaut’s pastor even provided the cup, which he showed to Aldrin, who tested its weight. “I hefted it,” he wrote, “and was pleased to find that it was light enough to take along. Each astronaut is allowed a few personal items on a flight; the wine chalice would be in my personal-preference kit.”

Pastor Dean made plans for two special communion services at Webster. One would be held with Aldrin, just before he left Houston for the launch at Cape Kennedy. “The second,” Aldrin wrote, “would take place two weeks later, Sunday, July 20, when Neil Armstrong and I were scheduled to be on the surface of the moon. On that Sunday the church back home would gather for communion, while I joined them as close as possible to the same hour, taking communion inside the lunar module, all of us meaning to represent in this small way not only our local church but the Church as a whole.”

Aldrin wrote that he gave considerable thought to the passage of Scripture he would read for the occasion before settling on John 15:5, in which Jesus says, “I am the vine; you are the branches. Whoever abides in Me and I in him, he it is that bears much fruit, for apart from Me you can do nothing.” “It seemed to fit perfectly,” Aldrin wrote, adding, “I wrote the passage on a slip of paper to be carried aboard Eagle along with the communion elements. Dean would read the same passage at the full congregation service held back home that same day.”

After the historic landing, as the men prepared for the next phase of their mission. Aldrin spoke to the ground crew back on earth. “I would like to request a few moments of silence,” he said. “I would like to invite each person listening in, wherever and whomever he may be, to contemplate for a moment the events of the past few hours and to give thanks in his own individual way.”

Aldrin described the scene in his own words:

“In the radio blackout, I opened the little plastic packages which contained the bread and the wine. I poured the wine into the chalice our church had given me. In the one-sixth gravity of the moon, the wine slowly curled and gracefully came up the side of the cup. Then I read the Scripture [Jesus’ words in John 15]: ‘I am the vine, you are the branches. Whosoever abides in me will bring forth much fruit.’”

Armstrong observed quietly but did not participate.

Aldrin continued, “I had intended to read my communion passage back to earth, but at the last minute [they] had requested that I not do this. NASA was already embroiled in a legal battle with Madalyn Murray [O’Hair], the celebrated opponent of religion, over the Apollo 8 crew reading from Genesis while orbiting the moon at Christmas. I agreed reluctantly. I ate the tiny Host and swallowed the wine. I gave thanks for the intelligence and spirit that had brought two young pilots to the Sea of Tranquility. It was interesting for me to think: the very first liquid ever poured on the moon, and the very first food eaten there, were the communion elements.”

It’s also interesting to realize that some of the first words spoken on the moon were the words of Jesus Christ, who made the earth and the moon — as Colossians 1:16-17 tells us, “For by Him [Christ] all things were created, in heaven and on earth, visible and invisible, whether thrones or dominions or rulers or authorities—all things were created through Him and for Him. And He is before all things, and in Him all things hold together.”

Fifty years on, the lunar missions remain among the most reported and analyzed events of our—or perhaps, any—time. They still fascinate, inform, and inspire us. And for Edwin “Buzz” Aldrin, Jr., and several of his pioneering colleagues, they were not only a triumph of science and engineering, and humanity’s first steps into the cosmos. They were something more—a chance to see the creation and appreciate The Creator with renewed awe and wonder.

Postscript:
Over the years, Aldrin has described his Communion experience on the moon several times, including an August, 1969 interview with LIFE magazine, an October, 1970 Guideposts article, and in his 1973 book, Return to Earth. Webster Presbyterian Church will hold its 50th Lunar Communion Celebration later this week, on July 21, 2019. Learn more here.