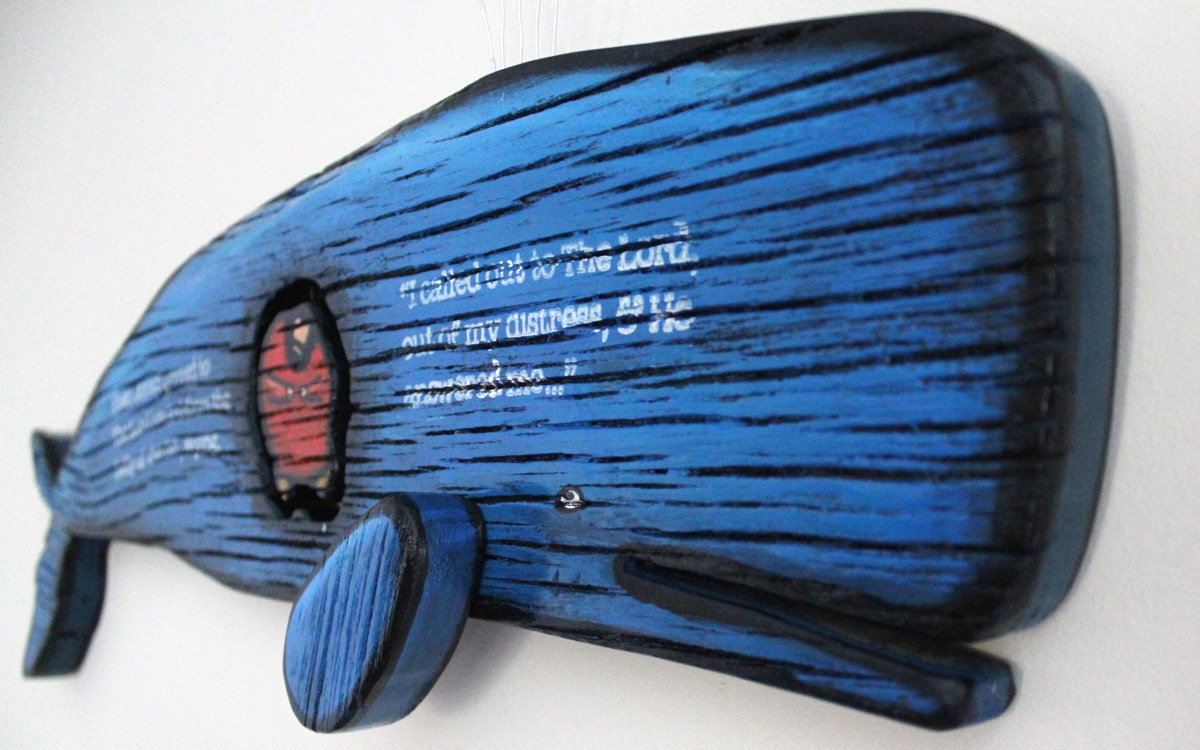 This Salvaged Messenger sculpture shows Jonah in the belly of a whale. Whether it was a whale or a fish, as some translations say, Jonah was hard at work praying to God. And who wouldn’t be praying in that situation? What’s your whale?

I don’t text a whole lot. But when I do, I only type with my right index finger. Teenagers I know use both their thumbs and type blazingly fast. My kids make fun of me for the way I text. That’s life. When I receive a text, it’s usually from my wife, or a close friend or family member. Those messages are important. Of course, my wife’s are the most important! But all this got me thinking about messages of the non-instant variety — messages that come from the most important one of all — the Creator of this world, God Himself.

If you’re old enough to remember the E.F. Hutton commercials of the 1980s, you might remember this line:
“… Well, my broker is E.F. Hutton, and he said…”
Immediately, everyone around the speaker leans in, eager to hear his next words as the commercial voiceover says, “ When E.F. Hutton talks, people listen.”

Well, when the Creator of this amazing universe has something to say, I want to hear it. And that’s when I started thinking about Jonah.

You’ll see a few different versions of Jonah and the Whale in the Salvaged Messengers series.

Why am I drawn to the story of Jonah and the whale (or the fish, or whatever)? Because even though Jonah made mistakes (big ones), God still used him as His messenger.

You can read his short story for yourself in the Old Testament book of the Bible that bears his name. When you check it out, you’ll see how God assigned Jonah the unenviable task of traveling to Ninevah (near modern-day Mosul in Iraq), to deliver some bad news to the Assyrians. They were about to be judged and obliterated by God unless they repented and turned from their wicked ways. Not a very popular message. Many historians count Assyria to be among the first superpowers of the ancient world. Jonah likely saw his assignment as a suicide mission. So he ran. But his running from The Lord and his appointed task wound him up in the belly of the “great fish” and then Jonah himself had to repent and realign himself with God.

This sculpture of Jonah in the whale is created from salvaged barn wood (circa 1905) from my cousin’s farm in southwest Virginia’s Giles County. The deep grain creates a challenge for hand stamping the Scripture, but the striking look that results is worth the extra work. Aside from the wood, the piece also uses wire, acrylic paint, and varnish.

By the end of the story (spoiler alert), Jonah had delivered his message, and much to his surprise, the citizens of Ninevah not only listened to him, but believed him and repented, just as God commanded them.

God’s message got through, thanks to, and in spite of, Jonah. And, like all of God’s messages, it was ultimately life-giving, life-affirming, and life-preserving. The entire city was saved and its citizens enjoyed a renewed relationship with God.

That’s the power of messages from the Creator of the universe and that’s the power that messengers carry, no matter how flawed we are! Listening to God and doing what He says brings blessing, renewal and incredible purpose into our lives. Beware! This little book in the Bible is packed with truth no matter which way you’re running in life.